"A BIG TIME ON THE NIPIGON RIVER THAT TIME..."

The Prince on the River 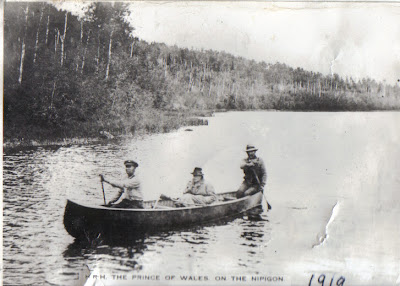 Lake Nipigon and its watershed will surely never see its like again. The atmosphere of a royal court permeated the reaches of its lonely shores when, in September of 1919, Edward Prince of Wales, took to a birch bark canoe to ply the waters of the mighty Nipigon River. These waters had become widely renowned as a "fisherman's paradise".  Its reputation was clinched as word of the catching of the world record-breaking speckled trout of almost fifteen pounds spread, attracting wealthy sportsmen to this area.

...a few people who recall the visit are taking a nostalgic look back. Joe Gagnon, Arvi Kuusisto and Sam Morceau (Morrisseau ?)peer back sixty years through a web of memories to recall their parts in the famous river excursion.

Reaction of the public to the Prince
This tour of Canada from sea to sea was the first of the twenty-five year old Prince's Empire Tours which were motivated by close contacts he made with regiments from the colonies and empire with whom he rotated service in World War I. He was attached to the Canadian Corps in France at the time of the Armistice rendering him a cherished spot in the hearts of all Canadians. As the Prince moved across the country, emotionally charged crowds amassed to greet him. The near-hysterical enthusiasm reflected, in part, the surge of fresh hope in a generation lately devastated over the stunning cost of the long war. As well, this Prince was truly worthy of adulation as he personified the hopes and excitement of the new era. The adoration of the throngs of young women knew no bounds, and their response to a glimpse of him often reduced them to swooning, weeping or fainting.

A little about the Prince's lifestyle
At a point about midway across the country, elaborate plans had been completed to provide this special traveller several days of wilderness retreat away from the madding crowds. It is highly probable, given the Prince's determined nature and athletic interests, that he was the prime mover in choosing a respite involving strenuous outdoor activity. He exemplified the typical English devotion to sport and hard exercise for its own sake and for the sake of keeping physically fit. At one time, he used to run for an hour before breakfast in the Palace Grounds. At a later date he started the day with an exhaustive programme of exercise in his private gymnasium.

The Prince is coming to the Nipigon
It was nearing the end of August when the Royal train reached Nipigon and swung Northward on the CNR branch line en-route to a wilderness lodge at Orient Bay on Lake Nipigon. This rustic but luxurious CNR Lodge, later named the Royal Windsor, sat in the isolated splendour of the untouched primeval forest. It provided its patrons with tours of the lake on a large gas launch and canoe trips which could entail over a week's travel to the mouth of the Nipigon River. This trip offered a unique white water experience. It involved a twenty-four mile boat trip from Orient Bay to Virgin Falls near the source of the Nipigon River. After shooting the Minor and Devi's Rapids, one usually portaged Victoria Rapids, the next in line, because a cross-current made them difficult to negotiate. After paddling Lake Emma, a widening of the river, came a mile and a half portage at Pine Portage where the White Shoots defied contesting. Next, one encountered Split Rock Rapids making for another portage before entering Lake Jessie, another river widening. Again it was portage at Cameron Falls and about a mile and a half of the same at Alexander Falls before encountering straight sailing down-river and across Lake Helen , another  widening, before taking the final leap into Lake Superior.

Preparations
Preparations for this momentous royal fishing trip had been running apace and now two camp cities at Virgin Falls and Pine Portage were in magnificent readiness.

Nipigon resident Arvi Kuusisto who was an employee of the CNR at Orient Bay at the time, recalls the Prince's moment of arrival there. This incident characterizes Edward's predilection for doing the unexpected.   Kuusisto said the railway workers had spent hours getting the rough road from the small depot to the Lodge in top condition by smoothing it and even watering it down to minimize the dust. As the entourage headed down the well-groomed road, to everyone's surprise the Prince, noticing a nearly obscured rugged trail, chose that route. He made his way through the woods to the Lodge alone with his anxious security guards in harried pursuit.

A lot of people in the Party
The Prince's party was, of necessity, large.  As heir to the throne no risks were permitted, so accompanying him were physicians, secret police, secretaries, valets and photographers, etc. This group travelled to Virgin Falls in the gas launch where a complement of about twenty Indian guides selected by Nipigon businessman, Jack McKirdy, waited. E.C. Everett says that Jack McKirdy told him the Prince was unhappy about having such an abundance of guides but, as Gagnon and Morceau agree, each one seemed to fill a required function. Chief Andrew Lexie of the Nipigon Ojibway Band was designated head guide accompanying Prince Edward in a birch bark canoe made at Nipigon House on Lake Nipigon.

The Prince recognizes Joe Gagnon
Incidentally, Lexie had been the guide for Dr. E. Cook, the man who caught the famous big fish. Joe said that most of the guides were war veterans and that he was designated as a head waiter. All the cooks and kitchen help wore the conventional white aprons, suits and chef-type hats. Joe tells of an incident that in his words, made the whole experience that much more wonderful to him. He said when first taking dining orders from those in the royal tent, the prince was seated at the far end of the table. During the encounter, the prince looked intently at Joe and said, "Haven't I seen you somewhere before?"

"Yes, Your Highness", said Joe "You shook hands with me after I held your horse at E'Qualte Ste. Quintne, France when you inspected our battalion on the field before we went to the battle of Cranbri."

The Prince smiled in agreement.

Sam Morceau of the Lake Helen Reserve says he was one of two men selected to be canoe couriers linking the fishing party to the outside world in Nipigon. Sam said both he and his partner were young, agile and quick. They used a light Peterborough canoe to accelerate their daily task of bringing the mail, messages and any overlooked necessities usually picked up at McKirdy's store.

Sam put the magnitude of the Princely sojourn into a nutshell with his sentimental comment, "I remember, it was a big time on the Nipigon River that time, when the Prince came down to see everybody."

The set-up at the camps was complete with wood burning stoves and every culinary requirement in a tent kitchen adjacent to the large dining tent. Live poultry cackled in pens and there was fresh milk brought daily for the royal cup of tea. The lamps lit up the forest "like the city of Port Arthur" glowing all night, said Sam. Extra stores of food were on a flat-car at the Cameron Falls siding and were brought in as needed.

Morceau felt well compensated at four dollars a day although the arduous work often involved an over fifty mile round trip daily. Asked if he thought the Prince enjoyed himself, Sam said his two brothers who also guided, said the Prince was elated at catching a speckled trout about fifteen inches long in Robinson Pool below Pine Portage. Sam told of an incident that completely broke up all the spectators because , although funny in itself, the Prince's reaction to it made it doubly humourous. One morning as the guides were busy breaking camp, the Prince indicated he wanted to snap a picture of some of the canoe packers leaving. At that point, two of the cooks went by, namely Long Tail Charlie Grevease, who was well over six feet, carrying the canoe's bow and extremely short Joe Eskamo under the stern. The contrast in the stature of the two men packing the tilted canoe convulsed the Prince into such a laughing siege, he was unable to take the snapshot.

A strict pecking order existed amongst the guides with three main guides next in command to Lexie with hat-type denoting their status. This minimized any personal exchanges between lesser guides and the Prince but at the end of the trip the King-to-be warmly shook each guide's hand as a parting gesture of gratitude, Sam fondly recalled. "It was a big time on the Nipigon River that time." and the Prince was among the last visitors to experience it's pristine state of natural beauty.

Progress was on the march heralding the modern era of electrical dependence. Man's inevitable encroachment into the area would bring with it irreversible changes as preparations for the first power dams on the river were already well advanced.

Indeed it was, "a big time on the Nipigon River that time", with Mother Nature providing a setting truly befitting a King. 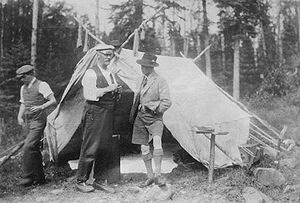 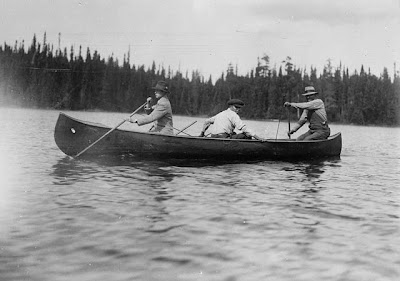